Please, answer one silly question: Why are management automation systems created? It seems the answer is quite obvious. They are created to automate management, i.e. to replace manual functions with functions performed by machines and/or by computers. So, why is the task of replacing manual operations ignored so often? Instead of doing so, system designers just throw a bunch of tools at managers, and managers then have to figure out how to use them to get things done. Such tools are usually focused on gathering initial data and on performing specific actions, leaving intellectual work out of the picture.


In order to focus system designers on building more complete automation, and to outline some main implementation approaches, we introduced the principle of Automated Decision Making.


To start, let’s define what the term “decision” means from a goal-oriented point of view. At a basic level, when a person says, “I made a decision,” he is typically saying that, “I’m going to do this, I won’t do that, and I’ll do those in a different way.” There we can immediately see that he is talking about goal setting--he set some goals, removed some, and changed others.


From the description above we can come to a more formal definition: “A decision is a set of operations over goals (create, delete, update) made for a specific reason.”


We can see in this definition the related functions of “decision making,” “planning,” and “goal setting.” In the context of OODA loop these functions are performed at the Decide state, in which goals are defined based on higher-level goals, broken down into subgoals and actions, and then attached to execution strategies that are chosen and adjusted. Decisions lead these functions.


When people say that decisions must be attached to reality, they mean that decision making cannot be based on desires only, but also must take into account real facts. Such facts are:

The main provider of facts in the OODA loop is the Orient (analysis) state.


As we already discussed in posts about the OODA Loop definition and it’s implementation attempts, the Orient (analysis) and Decide (planning) states often have no clear boundaries and can be mixed together. However, those two states are responsible for most of the intellectual work performed by managers, which many system designers tend to work with and develop components around. When such components are implemented they are usually called “Decision Support Systems” or DSS.


There is a variety of different options to implement decision making. The two main approaches are called the analytical (rational) approach and the statistical (natural) approach:

The analytical approach is based on a formal knowledge about a system and its behavior. In contrast, the statistical approach uses the history of past management decisions, and it’s the most commonly used approach by humans. The human brain doesn’t necessarily count well, but it is a perfect associative computer which can find and modify various patterns collected in the memory. A former student, who has just found his or her first job, tries to maximally use the knowledge obtained at university. But as the student gets more experience, that university knowledge is used less and less, and he or she will more often apply patterns from successful past decisions made on the job.


Both approaches have their own pros and cons:


It is sometimes possible to combine these two approaches in particular DSS implementations.


Many times, organizations have a problem with implementing DSS because of the high technical complexity and cost of DSS and sometimes a lack of necessary supporting technologies. Here we have to understand that automation does not have to be all or nothing. In most cases, automation can be increased gradually, going through the following levels:

As you can see, Decision Support Systems can lead to Automated Decision Making.


Here is the 8th principle’s definition:
“Decisions in management automation systems are subjected for automation by Decision Support Systems (DSS). DSS can be analytical or statistical, and may operate at different levels, gradually increasing from manual levels in an organization to fully automated levels.” 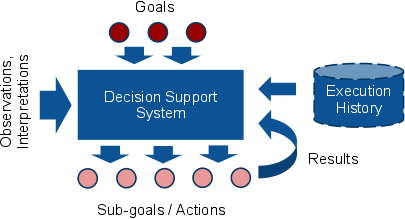 Decision Support Systems, even if they are implemented at a basic level, can lead to Automated Decision Making. This will in turn lead to strong management automation systems.
Posted by Sergey Seroukhov at 5:32 PM