How is management automation developed today? “Well, there are many ways,” you might say. And you’d be absolutely right. Today it is still an art rather than a science. Companies had to invent their own methods of development, make mistakes, learn from those mistakes, and later repeat them all over again. While doing research in C2/GOMA, we saw a lot of typical mistakes as well as many good solutions. As a result of our work, we formulated 9 principles to guide the development of management automation.

While some of these principles may seem obvious, we believe all of them are critical for creating a good management automation system.

Here are our 9 principles:

1. Organization Wholeness. Any organization is an open system created with the intent to perform work in the outside world. Irrelevant to its size and industry, the organization must have different management levels and functional areas, working together to accomplish the organization’s intended purpose.

2. Continuous Management. Any activity in an organization can be considered as a continuous management process that transforms information through 4 distinct states: Observe, Orient, Decide and Act. Even the simplest work can be viewed as the management of a particular piece of equipment or one’s own body.

4. Goal-Orientation. Most interactions in an organization are driven by goals. Higher-level goals are detailed, broken down into sub-goals, and propagated throughout management levels until they are executed. The outcomes are then composed together and included in the overall achievements of the organization.

5. Information Integrity. Any decision in an organization has reasons and consequences. An analysis, based on the information and outcomes of previous goals, is used to drive new decisions. The management automation system, in order to help its users make logical and correct decisions, must provide an infrastructure to keep the information whole and complete.

6. Shared Situational Awareness. Decisions in an organization must be based on actual situational information. Because of this, the management automation system must provide shared situational awareness based on validated and consolidated data. The situational information can be represented in different forms, graphically or textually, and visualized by the use of Common Operational Pictures (COP views).

7. Standard and Unambiguous Communication.  Communication in a management automation system must be based on commonly understood languages and standard protocols through all aspects and levels of the organization. This will aid understanding and the seamless integration of automation processes.

8. Automated Decision Making. Any decision in an automated system will be made by Decision Support Systems (DSS). DSS can be analytical or statistical and may operate at different levels, gradually increasing from manual levels in an organization to fully automated levels.

9. Complementary Information Types. The management automation system, in addition to having formal and structured information, must also support informal and unstructured data in order to respond to unpredictable real-world situations. The structuring of information in this way will enable the management automation system to respond realistically to real-world circumstances, make informed decisions, and effectively increase the level of automation.

Keep reading!
Posted by Sergey Seroukhov at 3:52 PM No comments:

Levels of Reasoning in Goal Setting

The setting and reaching of a goal is most often pictured as a deliberately planned and executed act. But in reality this is extremely rare. Most often we can see things around us happening that are just following the flow, without any special considerations or thoughtful actions. That creates a disconnection between goals and everyday life. In C2/GOMA we are trying to automate the most common everyday situations using a goal-oriented approach. In order to do that, we have to bridge that gap somehow. We need to change the way we think about goals and accept the fact that goals may not always be deliberately planned. Jens Rasmussen came up with a model called “3 levels of human behavior/reasoning,” which gives us a totally new approach to goal setting.


In the paper “Skills, Rules and Knowledge; Signals, Signs, and Symbols, and Other Distinctions in Human Performance Models”, Jens Rasmussen writes: “The introduction of information technology based on digital computers for the design of human-machine interface systems has led to a requirement for consistent models of human performance in routine task environments and during unfamiliar task conditions. A discussion is presented of the requirement for different types of models for representing performance at the skill-, rule-, and knowledge-based levels...”.


Further down he defines 3 levels of human behaviors:


1. Skill-Based: “The skill-based behavior represents sensory-motor performance during acts or activities, which, following a statement of an intention, take place without conscious control as smooth, automated, and highly integrated patterns of behavior.”


2. Rule-Based: “At the next level of rule-based behavior, the composition of such a sequence of subroutines in a familiar work situation is typically controlled by a stored rule or procedure which may have been derived empirically during previous occasions, communicated from other persons’ know-how as instruction, or a cook-book recipe, or it may be prepared on occasion by conscious problem solving and planning.”


3. Knowledge-Based: “During unfamiliar situations, faced with an environment for which no know-how or rules for control are available from previous encounters, the control of performance must move to a higher conceptual level, in which performance is goal-controlled and knowledge-based. In this situation, the goal is explicitly formulated, based on an analysis of the environment  and the overall aims of the person. Then a useful plan is developed...”


You shall remember that C2/GOMA defines goal as “a future state of affairs that person or system plans or intends to achieve.” But the definition does not explicitly say how that state is set and achieved. It could be deliberately planned, intuitively figured and carried out, or, even, could be a preset function.


Following Rasmussen’s reasoning loosely, we can apply his 3 levels of human behavior to Goal Setting:

As you can see, most of our goals (or future states) are set and achieved at an unconscious, skill-based level. When we set a goal to walk to a nearby place (future state: take a certain position in space) we don’t plan every step, our body simply acts automatically. When we need to type something on a computer (future state: enter specific text) our fingers just press buttons by themselves. We don’t think about it much.


Sometimes, we may use our brain to deal with minor changes in a situation to tweak patterns we acquired over our lives, picked up from family members, learned at school, or watched on TV. The human brain is a perfect pattern-based machine. Its associative memory can store an enormous amount of different patterns and quickly find something, even if it’s loosely related and based on some weird association. In this regard, there is no computer available yet that can match a human’s brain. Even when meeting something new, a person will most likely find something similar in his or her past experience and will quickly apply it to the new situation.


To tell the truth, it is actually very rare that we sit and sweat and try to invent something totally new. It is rare that we try to take on unfamiliar situations and goals. Most of us don’t like that. Working at the knowledge-based level is an area for weird creative individuals. Most of us prefer to stop or walk away from a situation when there is no suitable pattern found.


The majority of our goals are set and carried out at the rule and skill-based levels, and only a few--many times the most important--are performed at the knowledge-based level.


There is one more aspect I want to mention here. C2/GOMA doesn’t make a strong distinction between people and automated systems. That’s one of the strengths of the theory--a person can be replaced by a computerized system or robot and nothing will really change. The management model will stay the same.


How is this possible?


Actually, it’s quite simple. Consider the following: any automated controller or computer program works deterministically. It generates a predictable response to given inputs. Thus, if the goals (future states) of an automated system are preset, and plans to achieve those goals are hardwired into the system design, the system acts at a skill-based reasoning level much like a human would.


Some automated systems, powered by Artificial Intelligence, can act nondeterministically, or may alter their behavior based on achieved results. For instance, rule-based expert systems use predefined rules to generate responses, neural networks are trained on known datasets to be able to recognize familiar inputs, and statistical learning systems are able to process historical information collected in databases and then discover statistical patterns. These methods are still not as sophisticated as the human brain. But they are already able to achieve quite a lot... You’re absolutely right, if you recognize reasoning in these systems at a rule-based level.

But what about the knowledge-based level of reasoning? Most people don’t want and don’t like to operate at the knowledge-based level, and, so far, automated systems are not able to reach that level yet. Therefore, even though C2/GOMA is trying to automate as much as possible, there are still areas with new unfamiliar goals where creative people cannot be replaced with technology. However, considering the rapidly expanding knowledge of our information age, such creative and special areas are shrinking quickly. The three levels of reasoning and goal achievement may soon all be carried out by management automation systems.

Posted by Sergey Seroukhov at 11:05 PM No comments:

Goal Orientation is the second key to the C2/GOMA principle. It states that most interactions in an organization are driven by goals. Higher-level organizational goals are detailed, broken down into sub-goals, and then propagated throughout the management levels until they are executed. After the goals and sub-goals are completed, the following results are then composed together and become included in the overall achievements of the organization. 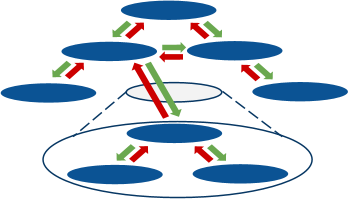 
Depending on the organization, the goal structure may significantly vary. However, the formation will usually contain the following six levels of goals:


Historically, the creation of an organization’s goals and their orientation was tightly related to the organization’s structure and top levels of management. Structures like these, where goals are defined and flow in a strictly top-down manner, are known as “hierarchical structures.” In the modern world rigid hierarchical structures are becoming less popular due to their inefficiency and lack of agility. This has given birth to a more relaxed organizational structure where goal propagation and orientation is not tightly related to the chain of command, and where goal making is instead allowed at multiple levels. Relaxed structures like these are called “networks.”

Theoretically, it is possible to have goal propagation from lower to higher levels across different chains of command, but, practically, it may not make sense due to incompatible planning horizons.

As the second key to the C2/GOMA principle, an organization’s goal orientation must fit its structure in order to be effective. With an effective goal orientation, management automation will be much easier to carry out.
Posted by Sergey Seroukhov at 7:13 PM 3 comments: