Unfortunately, the management in most organizations today is based on implicit goals. Managers with a vague idea and understanding of their goals pass information on to their subordinates in a trimmed and distorted form. The subordinates then take these vague and trimmed goals and try to work them out for their subordinates. Therefore, after the information has gone through two or three management levels, it is nearly impossible to match the lower-level goals and their outcomes to the original upper-level goals. Also, while time passes, situations change and goals also change. Because of this, the discrepancies between goals grow larger and larger. Such non-transparent management is highly ineffective and could lead to unpredictable, unbelievable, and unrelated results. The links between the results and upper-level decisions are missed, and it takes a lot of effort and deep understanding of the situation to figure out what happened and why. Such a style of management is called “Management and Analysis Islands,” and it’s a big mess. 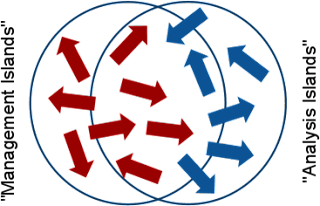 Goal-oriented management offers an entirely different approach. In C2/GOMA goals are defined explicitly. Higher-level goals are detailed, broken down into subgoals, and propagated to executors. When goals are defined the information about their causes and effects, and the relations between higher and lower levels goals, is preserved. Achieved results are also linked to the goals and actions that led to those results. All of this information makes it possible to clearly see why certain decisions are made, how those decisions are executed by lower management levels, and how results relate to decisions at any level.


In order for goal-oriented management to do this, one of the most important and needed C2/GOMA functions is the support of decision reason and consequence links in the information flows. This requirement is addressed by the 5th automation principle--the principle of Information Integrity.


The principle of Information Integrity allows us to eliminate gaps in management and analytical information, and then link that information into continuous flows. Having an absence of information links between management decisions, between reasons and their consequences, makes management non-transparent and significantly complicates management in multi-level systems. The inability to clearly and easily link results to their original decisions breaks the feedback loop. It puts results analysis on the shoulders of human-managers and becomes a serious barrier to increasing the level of automation. Thankfully, the principle of Information Integrity takes care of this problem.


Definition: “Any decision in an organization has reasons and consequences. An analysis, based on the outcomes of previous goals, is used to drive new decisions. The management automation system, in order to help its users make logical and correct decisions, must provide an infrastructure to keep the information whole and complete.” 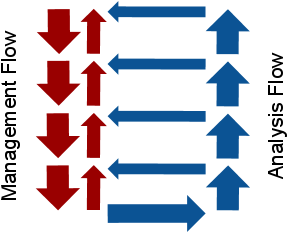 Key points of the definition:

When using the principle of Information Integrity:

If the management automation system has a common goal repository, which allows it to quickly and easily restore the entire goal chain using reason-consequence links, it is possible to use a truncated goal vector which contains only the identifiers of the lowest-level goals. Otherwise, when goals are spread across multiple components and it is not possible to quickly restore the chain of goals, a complete goal vector shall be stored with the identifiers of all sub- and super-goals, i.e. the entire chain of goals. 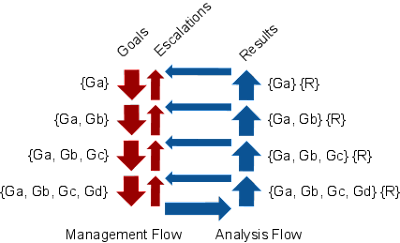 By using only explicit goals and keeping information whole and complete--by using the principle of Information Integrity--all the decisions and related results of a management system can be easily seen and understood.
Posted by Sergey Seroukhov at 11:58 PM 1 comment:

The principle of Organization Wholeness says that the elements in a system are interdependent and collaborate with each other. But it doesn’t say how exactly they collaborate. In this post I will discuss the 4th automation principle, which states that the collaborations of elements are not chaotic, but follow a specific law--Goal-Orientation.

We already know that an organization is a goal-oriented system. It has goals with elements that collaborate in order to contribute to those goals. Detailed at the upper management levels, organizational goals are broken down into smaller and more concrete sub-goals, and are then propagated to the levels below. The same process then happens again until all goals reach an elementary level and are set to an immediate executor. After that the elementary goals are executed and produce specific results. When these elementary goals are completed, they are composed together and attributed to higher-level goals. Achievement of the higher-level goals then leads to reaching their super-goals and so on.

In this way, reaching the overall organizational goals is based on the cummulative effect of reaching elementary goals at the lowest management levels. Because of this, the biggest objective of upper management levels is to optimally break down goals into subgoals, propagate them to lower levels, track the execution process, and make necessary corrections.

In addition to goals there are many other information flows that circulate in an organization--observations, interpretations, escalations, results. But all that information doesn’t have a value on its own. It is required by the goal reaching process and has to be considered in the context of related goals.

The principle of goal-orientation, as well as the other principles, stands against the gaps in automation. Specifically, though, it targets the gaps in collaboration and alignment between elements and management levels.

Definition: “Most interactions in an organization are driven by goals. Higher-level goals are detailed, broken down into sub-goals, and propagated throughout management levels until they are executed. The outcomes are then composed together and included in the overall achievements of the organization.” 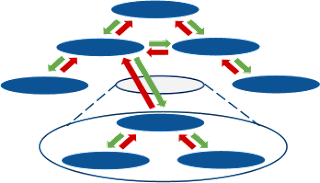 
By keeping an organization goal-oriented, every element of the organization will easily collaborate and communicate with each other.

When creating a new management automation system, the most common question that developers have is, “What will it do at the end?” It is quite hard to answer such a concise question with a similarly concise response. After all, management automation is a relatively complex thing. However, my research partner and I tried to outline the overall direction and give a few tips regarding what should be included into a conceptually complete C2/GOMA system. The next principle, Functional Completeness, talks about that. 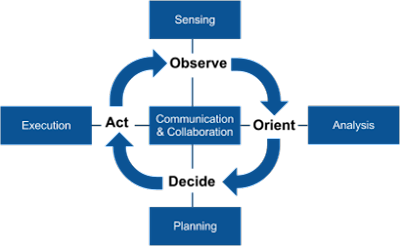 To implement Functional Completeness, do the following:

By integrating the functional groups of Sensing, Analysis, Planning, Execution, and Communication & Collaboration into your management automation system, you can have Functional Completeness.
Posted by Sergey Seroukhov at 12:16 PM 1 comment:

The principle of Continuous Management looks at any activity in any level of an organization as an OODA Loop management process. This approach presents a universal model to look at the management performed by a single person, a group of people, or an autonomous system. Also, because of the OODA Loop approach, the transition from manual to automated processes and visa versa is made easy, without drastic changes to the way management is being done. These facts are very useful in the development of management automation systems.

Continuous Management is defined as the following: “Any activity in an organization can be considered as a continuous management process that transforms information through 4 distinct states: Observe, Orient, Decide and Act. Even the simplest work can be viewed as the management of a particular piece of equipment or one’s own body.” 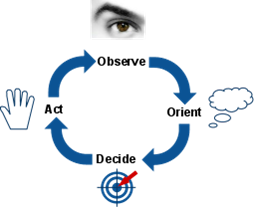 Finally, now that we see how Continuous Management is defined, how do we apply it?

By doing this, the principle of Continuous Management will help us create complete management automation systems.
Posted by Sergey Seroukhov at 7:48 PM 2 comments: