Which Side Is Your Brain On, or, Once Again About Goal-free Living

In 2011 I found a book by Stephen Shapiro named “Goal-Free Living.” The book intrigued me a lot, and I even wrote a post, assuming that the author didn’t mean that all goals should be thrown into the trash. Such a thing would be too radical. I thought that the book would most likely talk about tweaks in working with goals. But I was finally able to read the book and was surprised to find that Stephen really did oppose the classical goal-setting approach. He instead used goal-free techniques, in which “goals” became “aspirations,” and “action plans” became an “intuitive compass.” On the surface it sounded pretty revolutionary. However, the more I read the book, the more I saw similarities with other ideas I’ve seen elsewhere.


I found the strongest association between Stephen’s book and another book by Dr. Beverly A. Potter with the long name, “High Performance Goal Setting : Using Intuition to Conceive and Achieve Your Dreams.” The answer popped up almost immediately--it seemed that Stephen was really only talking about an intuitive approach to goal setting! The substitution of common terms with new ones confused me, but not too much. He was only trying to present his own ideas as something new. There were some ideas that I’d never seen before, but there was no true revolution. Stephen just looked at goal-setting from a different angle, complementing it with his approach instead of actually contradicting it.
Over the years, the dominating approach to goal-setting has always been based on the clear and elaborate definition of goals, action planning, and the critical analysis of results. This method can be heard from the majority of trainers and be read in numerous books. As more people have accumulated experience with goals, though, it has become apparent that these rational methods of goal-setting are not for everyone. In the beginning of his book, Stephen showed some interesting statistics. He demonstrated that more than half of all people who practice goal-setting do not achieve their desired results, but rather raise the amount of stress in their lives.


I have to admit that I was mostly focused on the rational approach. My main objective was to automate management, and automation, using modern computer technologies, is easier to accomplish with rational goal-setting than with intuitive. After reading Stephen’s book, I decided to figure out how the two approaches relate to each other.


A solution appeared right away. I just had to remember that people have different abilities in abstract thinking, analysis, and math. Those abilities, as modern research shows, depend on which of the two hemispheres of the human brain is the dominating side. People with a dominating left side use analytical thinking and are more inclined to operate with facts. People with a dominating right side, however, belong to a more synthetic type. They most often operate on emotions and are more inclined toward a holistic perception of reality, looking more at the big picture of life and less at the smaller details.


Here are some of the ways they differ: 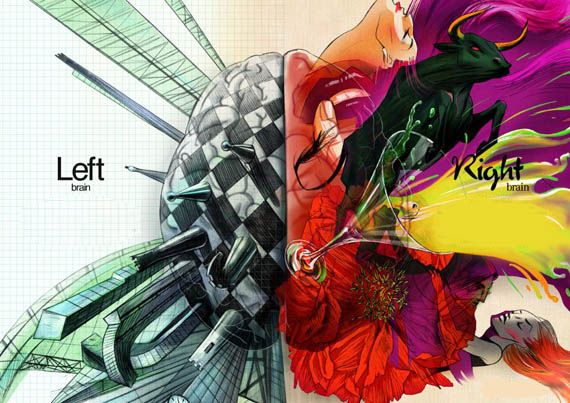 As you can see, for right-brained people the picture of modern goal-setting is not pretty. One way or another, our society imposes approaches on them that do not suit them well. By following the currently advertised methods, they set goals for themselves, spend their lives on trying to reach them, and then fail at the end. Individuals with a dominating right side get into a conflict with their own nature. Furthermore, because they are unable to accurately define and structure their feelings, they sometimes tend to copy goals from somebody else. They go after these goals, following a correct way that doesn’t match their actual situation, and receive generally negative results. Also, even when the adopted goals are achieved, since they are alien to the adopters, they don’t bring the satisfaction that was desired.

Because of the reasons above, it is nice to see more work being done on the intuitive approach. It minimizes the disproportion and helps people with a dominant right brain to reach success with more appropriate methods. The intuitive approach does not contradict to the rational one in its fundamental principles. It just sees them from a different perspective. In the table below I show how these goal-setting principles relate to each other in each approach:


If a human being has only two hemispheres in his brain, does it mean that there are only two approaches to goal-setting? In reality, both approaches--rational and intuitive--belong to so-called “cognitive” (conscious) methods. There are other goal-setting methods, which are based on manipulations of the subconscious mind. Shamanism and witchcraft, meditation, religious practices, NLP (neuro-linguistic programming), and many other methods are able to predefine and direct human action at a deep level, without touching the cognitive mind. Their use is limited to typical patterns, though, and shifting away from those patterns can result in unpredictable circumstances and is practiced only by specialists. Those practices still require good research before they can ever be practical and efficient tools for regular people.

The last point I’d like to make in this post is related to goal-setting in groups and organizations. If an individual sets and reaches goals alone, one style would be more than enough. However, the practice of doing so shows that the one-sided approach in group goal-setting is ineffective. If goals are set using a rational approach, they are usually perceived as firm instructions to follow with no room for creativity and individuality. In this case, the involvement of group members is relatively low, and their potential, especially that of creative people with a dominant right side, remains underutilized. On the other hand, if goals are defined intuitively as a vivid but undefined picture, then every team member may understand the goals differently. As a result, their actions pull the group into different directions and the overall positive effect is minimal.

To make group goal-setting more effective, combined methods should be used. In doing so, goals should be presented colorfully to stimulate emotions, and at the same time be discussed, key points written down to synchronize the visions of all group members. Action plans should then be set up as clear steps with delegated responsibilities, but should not fall into micro-management. Giving more freedom to every player will allow them to do the work in their most convenient and efficient way. By incorporating both methods of goal-setting, the group will reach better results and higher satisfaction.

In literature you can find two typical leadership styles: charismatic and organizational. It is obvious that charismatic leaders rely on a right-sided, intuitive management style with vision and ideals. On the contrary, organizational leaders use a left-sided, rational approach with clear structure and deep elaboration. However, in many cases successful leaders cannot organize and lead a big group of people just by themselves. In order to do that, they need assistants to compensate for missing parts. Thus, in organizations, charismatic leaders need rational and logical assistants, who will transform their visions into clear action plans and execute them with all available energy. Organizational leaders then need the other type of assistants--idea generators. They can then take their ideas, structure them, and effectively implement them using available resources. In all things, balance is needed. Where there is a right brain, it is good to have a left brain. Therefore, in an organization, it is best to use both rational and intuitive goal-setting.

Posted by Sergey Seroukhov at 10:50 PM