The first step in working with any system is to understand it by starting with its description, which can be expressed in a formal or informal manner. A model, which is an abstract formal definition of a system, can be very helpful. It describes a system’s structure and behavior and can be represented by several interrelated views. In this post, we will look at a general approach to modeling goal-oriented systems and the reasons behind doing so.

Below are two of the most typical methods of modeling and improving models: the reengineering of business processes, and comprehensive management automation. 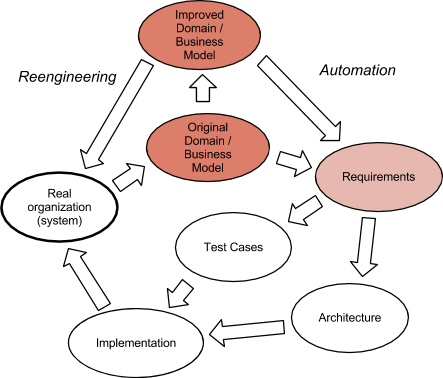 In both cases the process starts when a business analyst looks at a real or planned system, and then creates a formal model of the system’s structure and its behavior. This initial model is called the domain or business model. After that, the next steps are significantly different:

The modeling of Management Automation leads into GOMA Models. In order to understand GOMA Models, it is good to know about the modeling elements that may be contained in them:


All of these modeling elements have many complex relationships with each other. When not put into a GOMA model, these relationships might look similar to the following semantic map: 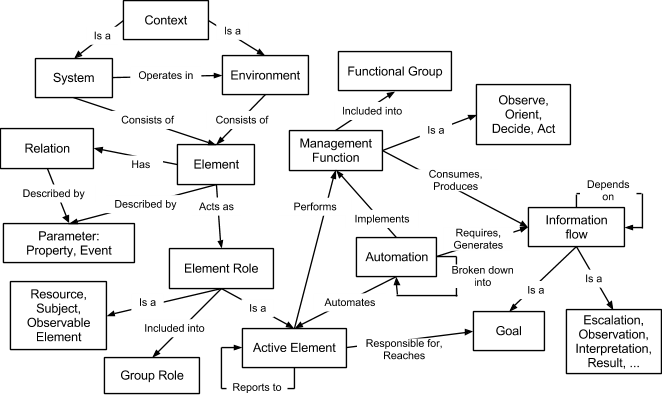 It looks like a big mess, doesn’t it? Ideally, a GOMA model will be defined with extremely high precision and details, so it can be sufficient for the design of comprehensive automation solutions--solutions that will completely replace humans in management systems. Obviously, if such complex models are visualized in a single plane, it will be practically impossible to read and understand them. That’s why GOMA models use a number of interrelated graphical views (diagrams). I’d like to emphasize that the diagrams in GOMA are not models. They are just views of a model to visualize it from a specific angle. Any change in a model shall trigger changes in the diagrams, which will contain the updated elements and relations between them. I’ll give you more details about different types of diagrams in my later posts.

Lastly, I’d like to mention the possibility of formally transitioning between different types of models. In the figure below, we can see the evolution of a model from a Domain/Business model to a Requirements model and finally to an Architecture model.

If the resulting architectural model is detailed enough, it can be used to generate code (similar to an MDA - Model Driven Architecture)

With all this information, it is clear that the complexity of GOMA models is usually high. It makes it very hard to create and maintain models without special tools. Thankfully though, the diagrams presented above help to understand them, and additional instrumentation tools are already being developed. (I will discuss these tools in a future post.)

Hopefully, this article has helped you to see the better benefits of GOMA modeling. Though complex, it is much easier to understand than the other typical methods of modeling. It helps us to better understand management automation systems.
Posted by Sergey Seroukhov at 12:31 AM