In the post “Goal Acceptance by Different Groups of People,” I described 4 categories of people in relation to how they perceive goals and goal-setting. Through that post, it was found that only two categories out of the four (innovators and dreamers, which make up less than 20% of the population), have an inclination to think positively about goals. The vast majority of people look at goals either neutrally or sometimes aggressively. Lately, I had to take a close look at that problem to understand how to involve all categories of people in the goal-setting process, what tools to give them, and how to help them become more effective and motivated people. During this examination I came up with an interesting model that I’d like to share with you.


The first idea that came to mind was that it’s pretty useless to try to change people’s perceptions of goals. A goal by itself doesn’t represent anything special. It is just a navigation tool--a method to move throughout life. Therefore, I thought it would make more sense to start looking at how different people perceive their life in general.


The second idea was that a person’s life consists of his or her past, present, and future. Goals are just road marks, attraction points in the future. The reaching process happens in the present, and all of that is based on events and experiences from the past.


Going from there, I tried to define how different categories of people relate to their past, present, and future. Here is what I got: 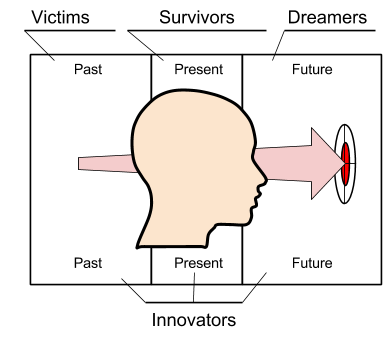 With those definitions, I then went on to think about how the various categories of people could be motivated towards the most effective and balanced innovator state.

There is a paradox, I found, that many goal-setting methods preach success building but rarely lead there in practice. As I see it, the problem is that most of them focus too much on the future, and pay little attention to the past and present. Following their instructions, people may force themselves into the dreamer category. They either get into a conflict with their current natural category, or switch entirely into the dreamer mode with all of its bad consequences. In order for all categories to become more effective and motivated towards goal-setting, the practices above should be applied.


Before I go, I’d like to share one more thought with you that you might find interesting. It seems to me, that some social groups, nations, and countries have their own dominating categories, reproduced by set policies. I won’t go too deep into it, but I just wanted to point out a few examples:


From these examples, we can see that countries that support innovators and innovation have made the most improvements to society.
Posted by Sergey Seroukhov at 8:18 PM