One of two key C2/GOMA principles, Continuous Management, heavily relies on a concept called the OODA Loop. This is an empiric model created by the military strategist, USAF colonel John Boyd, while he was working on the designs of F16 and F18 fighters. By analyzing dogfights in the Korean and Vietnam wars, he determined the critical factor for success was not faster and more maneuverable planes, but was whoever could obtain situational information faster, understand it, make better decisions, and then effectively act upon them. After determining this, John Boyd created a simple model that describes the work of a fighter pilot in a dogfight. It consists of 4 distinct steps: Observation, Orientation, Decision, and Action. (See following figure.)

These four steps are defined as follows:

In his work, John Boyd put a strong emphasis on tempo - a fast rhythm of going through the cycle. He stated that whoever can faster and better go through the steps in an OODA Loop will win in war.


However, though it was created with fighter pilots in mind, the OODA Loop cycle is not just specific to dogfights and war. It is able to describe the work of any type of agent. For instance:

Because the OODA Loop concept appeared to be so universal, it quickly spread into other areas. For example, the US Air Force adopted the OODA-like SHOR (Stimulus, Hypothesis, Option, Response) model to describe operations at a strategic command level. SHOR was then widely adopted by other branches of the military and later went into paramilitary and commercial domains. Today, there are many models similar to the original OODA Loop. Here are a few of them:

John Boyd published a paper and gave a number of presentations. But he never made a formal definition of the OODA Loop. Because of this, many other people created their own interpretations of the OODA Loop to apply to several specific situations, with many of them attempting to overcome the limitations in collaborative interactions (see definitions of C-OODA, T-OODA, M-OODA, and D-OODA loops).


Though it is a very useful concept, there are number of known shortcomings of the classical OODA Loop:

There are then a couple variations of the OODA loop model which are worthwhile to mention. The first one is a rather unsuccessful attempt called Nested OODA Loops (see following figure), which was meant to be applied at an organizational level. 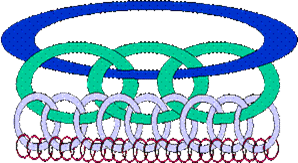 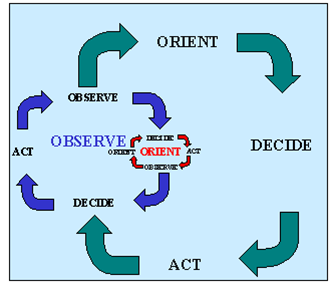 From the diagram alone, we can see that it was too messy and confusing to be applied successfully.


The second variation, however, is the more useful Virtual OODA Loop (see following figure), which allows us to combine individual OODA Loops of a group into a single large OODA Loop. It is then performed by a “superhuman” who does the same work as the entire group. The resulting Virtual OODA Loop provides a simpler model with the same inputs and outputs, but it removes the internal group loops. 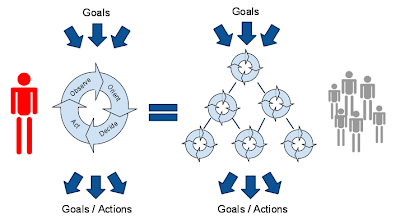 The Virtual OODA Loop then leads us to a need for our management automation.


But why is the OODA Loop so important to management automation? There are couple of reasons:


Reason 1. While building management automation, people perform a lot of analysis. That analysis simplifies and abstracts all the complexities of organization’s processes into a small number of well-defined functions. However, when those functions are put together, they often don’t quite match up with each other’s processes, and gaps appear where they should not be. We then have to deal with the problems found in the process-oriented paradigm (problems with scalability, flexibility, and efficiency). To improve the situation a reverse practice, called synthesis, is performed to reconstruct the system from individual functions and check how it matches with expectations. But it’s not easy to do... The OODA Loop gives us a synthetic model which helps us put functions into a natural continuous flow to bring it closer to the organization’s expectations and eliminate gaps. It helps bring us closer to full management automation.


Reason 2. OODA Loop is highly universal. It can describe the work of any type of agent at any organization level. It can be applied at a basic manual level and workflow, and then gradually increased to a high level of automation without changing the model itself.


With automation and the OODA Loop, C2/GOMA’s key principle of Continuous Management is possible.

Posted by Sergey Seroukhov at 12:20 PM